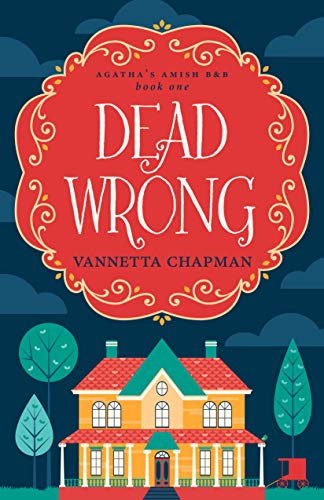 When Agatha Lapp’s brother and sister-in-law are tragically killed in a buggy accident, Agatha relocates to the new Amish community in Hunt Texas, nestled in the Texas Hill Country. She’s there to make a success of her brother’s dream–an Amish B&B. Agatha is friendly, efficient, and capable. She’s also a fifty-five year old widow who has learned to be independent. When she discovers Russell Dixon’s lifeless body in Cabin 3, she runs next door where retired detective Tony Vargas lives. The police determine that her guest died of natural causes, but as Agatha and Tony put together the events of the previous two days they become convinced that the police are Dead Wrong.

Dead Wrong is a story of discovering new friendships and embracing a different path in the midst of tragedy. Above all else, it’s a story of God’s grace and provision.

Agatha hurried down the path carrying the towering pile of fresh linens. Fonzi lay in the sun, curled like the letter U. She’d inherited the yellow cat with the B&B.

One more cabin to service and she could turn her attentions to putting the finishing touches on dinner.

Cabin 3 sat a little farther down the path and around the bend. Perhaps that’s why Mr. Dixon had chosen it. He seemed to value his privacy. Agatha stepped onto the porch but paused outside the front door. She clearly stated that the rooms would be serviced in the afternoon between three and five, but there was always the possibility that Mr. Dixon had decided to take a late afternoon nap.

Nothing worse than walking in on a guest who was fast asleep, snoring with his mouth wide open and his glasses askew. She’d learned that lesson the first week she’d reopened the B&B.
Knocking firmly on the door, she called out, “Anyone home? Agatha Lapp here.”

No answer.
Well, she hadn’t thought there would be.
It was a beautiful June afternoon. Why would anyone be inside?
She tried the door on the off chance it had been left unlocked.

Definitely locked, and the curtains were drawn tight as well. Agatha called out one more time, then reached into the pocket of her apron and fetched her master key. Slipping it into the lock, she pushed the door open with what she hoped was a friendly, “Anyone home? Just here to change the…”

She never did finish that sentence.
Her mind reeled, trying to make sense of the scene before her.

Mr. Dixon’s suitcase had been flung open and clothes tossed around the room. The breakfast tray she’d left on the porch earlier that morning sat on the nightstand by the bed, though the mug had been knocked over and lay shattered on the floor. The bedding had been dragged toward the open back door. She glanced around as if Mr. Dixon might pop out from the broom closet.

But there was no sign of the man.
No indication of what had happened.

She stepped toward the back door and peered outside, which was when her knees began to shake. She reached for the doorframe with one hand as her other fluttered to her chest and pressed against it to slow the hammering of her heart.

She simply couldn’t make the details of what she was seeing fit together into a cohesive picture—Russell Dixon lying face down at the edge of the clearing, one hand trapped beneath him and the other reaching over his head. The unnatural position confirmed what her mind couldn’t accept.

Mr. Dixon wouldn’t be caring if she changed his linens because Mr. Dixon was literally dead to the world.

As an Amazon Associate we earn from qualifying purchases. These e-books are free or discounted at the time of posting this article and only at USA Amazon.  Authors, publishers or distributors may change the price at anytime and without notice. Amazon currently allows you to return an ebook within 7 days of purchase for a refund.

Bible Cafe™ is an international community of nondenominational Christians who study, connect, and grow. We facilitate online Bible study through video, phone, and social learning groups. Founded in 2009 by Christine Abraham.

HOW TO CREATE A PRAYER BOX